ASP.NET Core (Vue) SPA: How to solve the deprecated "Microsoft.AspNetCore.SpaServices".

Almost half year ago, there was an announcement that the two nuget packages Microsoft.AspNetCore.SpaServices and Microsoft.AspNetCore.NodeServices are getting deprecated. Thus they will be removed and no longer supported starting with .NET 5. At the time of writing this post, ASP.NET Core 3.1 is marking the methods of those packages as deprecated, but still functional and supported.

Needless to say, that many developer are not really happy with the deprecation decision because they rely on one or both nuget packages. I wrote as well a comment to this discussion to encourage that there should be at least a migration guide. For everyone that doesn’t know the packages, they are usually used for the following scenarios (but not limited to):

With this post, I try to help other developers to migrate, be aware and solve the issue early as possible!

I have a side project, an ASP.NET Core Vue SPA application that does using those nuget packages for HMR (BTW. this works similiar for other SPA frameworks). The Startup.cs does look like this (ommited unrelevant parts):

This is a tremendous productivity boost while working on the front-end part of the application, because you don’t have to restart the whole ASP.NET Core application process. I personally loved this and many other developers too. So, let’s see how I removed the deprected package(s) and remain same productivity!

The proposed solution does only work when you have a mini-web-server as most front-end frameworks provide today (e.g. Angular CLI, create-react-app, vue-cli-service). For my ASP.NET Core Vue SPA application, I used the VueCliMiddleware nuget package that does the heavy lifting. The Startup.cs has been changed to the following:

The solution works fundamentally different from the previous solution. Incoming requests that match Webpack-built files will be “proxied” through the ASP.NET Core process to the “behind” running mini-web-server (here the vue-cli-service) - this works the same for other SPA frameworks like React and Angular.

In this first picture, you can see the ASP.NET Core app runs on localhost:5000 (red box). Immediately after that, a “vue-cli-service” process is started and builds the vue app (blue box).

After the “vue-cli-service” is finished building, it listens on localhost:8080 to serve the vue app. 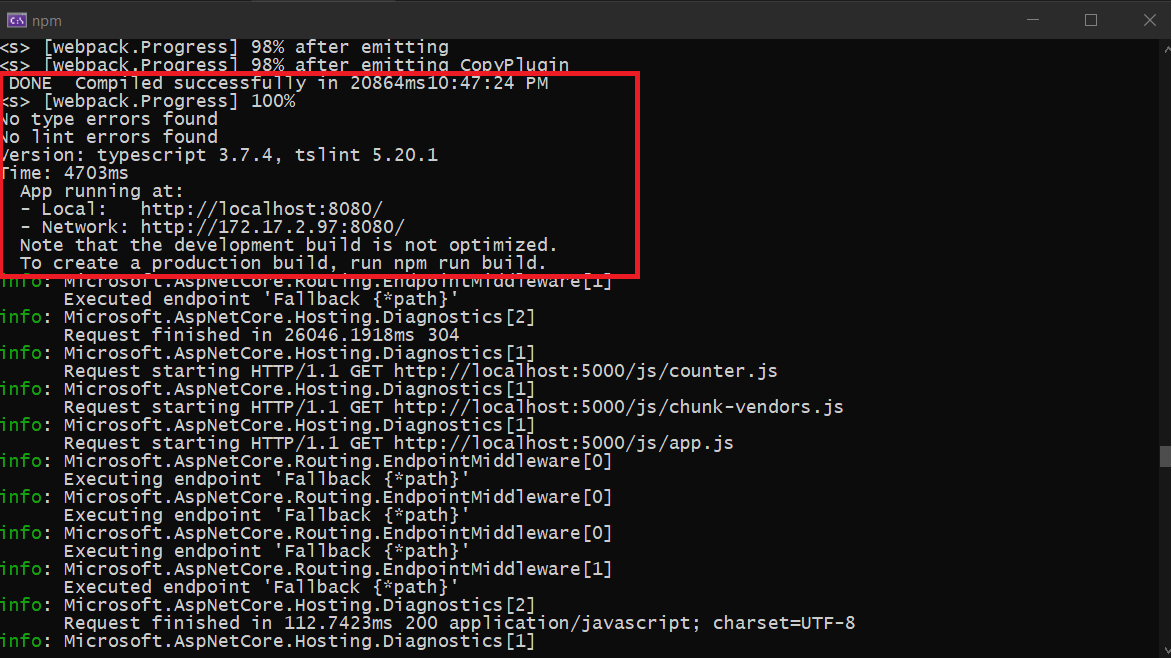 Note: When your application runs in production, there is no additional web server required - everything is served by a single web server like IIS or Kestrel.

In this post I described how you can remove the deprecated dependency and how you can replace it with something that is similar. I essentially explained this with Vue because there is only officially support for Angular and React out of the box.

When you have to migrate your ASP.NET Core 2.x SPA project: I recommend to have a look at the starter project template, to see how you could change the Startup.cs:

« .NET Conf 2019 review How to implement a BenchmarkDotNet XLSX exporter »